There are two phenomenon that everyone interested in the future of media should be tracking closely. The first is the iPhone, which is the first breakthrough mobile media device. The second is the transformation of newspapers as they work (REALLY) hard to evolve in a networked, digital media world where they no longer enjoy monopoly distribution. Every traditional medium is going through this transformation, but newspapers are feeling most acutely that the future is now. (Anyone who thinks newspapers aren’t working really hard to transform hasn’t witnessed what’s happen on the inside.)

Check out the lead story in my own local newspaper that arrived on my doorstep today, which demonstrates the point with appropriately deep irony. 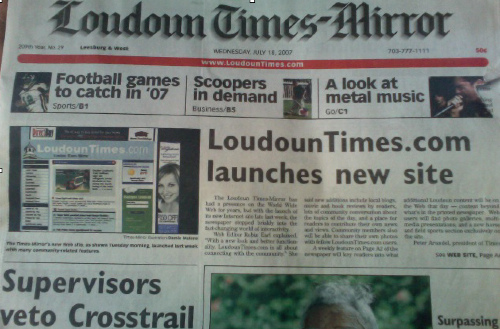 Here’s a round-up of newspaper news just from the last few days:
**
Newspaper Ad Sales Show Accelerating Drop**
This piece is just a round-up of declines in newspaper ad revenue from the first quarter, with anticipation for more bad news in the Q2 earnings releases, but this chart brings the situation into sharp relief:

**
Audit Bureau of Circulations will start counting newspapers’ online audience**
This gets to the problem I was looking at yesterday — the huge imbalance between the ad revenue per reader in print vs. online. But counting online audiences, although a critical first step, doesn’t get at the core issue of how these audiences are valued — and how newspapers can value their online audiences more (A LOT more).
**
Dow Jones Board Approves Sale to News Corp**
Maybe the last great newspaper M&A after Tribune’s sale to Sam Zell — or maybe the first in a wave of consolidation.
**
Jon Fine’s BusinessWeek media column challenges the San Francisco Chronicle to be first to stop publishing in print**
Jon makes an entirely rational economic argument that the best candidate to be first to make the bold move of giving up publishing in print is a newspaper like the Chronicle that’s bleeding cash. Jon sees it 18-24 months out. I could see it happening in the next 12 months. The conversations are already happening.**

Fisher Communications Acquires Hyperlocal News Pioneer Pegasus News**
What’s notable is that Fisher Coomunications is not a newspaper company, but rather an owner of local TV and radio stations, which have realized that they need to compete head-to-head with newspapers online for local ad dollars.

Washington Post Launches Hyperlocal Site LoudounExtra.com
This is a play for the local small business ad dollars that Washington Post can’t get in print, and which represent the long tail that they need to capture in order to shift the business’s center of gravity online.

Google Expands Its Print Advertising Program
Speaking of long local ad dollars, this is the deepest irony — Google, the archetypal digital media company, is — all at once — squeezing the inefficiency out of, disintermediating, and propping up newspaper PRINT advertising through its dynamic AdWords marketplace.

Yahoo, the other iconic digital media company, is coming at it from the other end with its Newspaper Consortium program that seeks, among other things, to bring market efficiency to local ad ONLINE sales by leveraging and evolving local ad sales channels.

It’s no accident that Google and Yahoo are so focused on newspapers. First, newspaper are close to — and have sales channels into — the still largely untapped markets that comprise thousands of local business who don’t yet advertise. Second, newspapers are the most fertile ground, given the harsh economic realities they face, for the kind of bold experimentation that is required for traditional media companies to survive in the digital age — and that will determine the fate of the billions of ad dollars still tied up in traditional media.