And earlier today I got a glimpse at what AOL is up to – they are hiring all the journalists being fired and laid off by the newspapers and magazines. And they now have a news room 1,500 journalists and editors strong. Amazingly, failing old media is throwing away their most valuable assets. And AOL is eagerly picking those assets up for a song. Before anyone knows it, AOL may be the most powerful news outlet in the world.

Given that NYT has gone to great lengths to avoid newsroom layoffs, I suspect they know full well how valuable their journalists are.

Mike Arrington is TechCrunch’s most valuable asset, for his personal brand and for the quality of the post he writes.

As Arrington points out, AOL CEO Tim Armstrong has also realized how valuable journalists are, and is aligning AOL’s new strategy with cornering the market for journalist talent.

But is Arrington right that media companies are blithely throwing away their most valuable asset? Why did newspapers make so many newsroom cuts on their path back to profitability? Is it because they don’t recognize the value of their journalists?

But to say that the value of industrial printing and distribution capacity is declining is not to say it has no value — it of course still generates most of newspaper company revenues. But the decline, while exacerbated to a large degree by the recession, is still secular long-term. (And newspaper companies are surely using the breathing room they achieved through cost reduction-driven profitability to figure out their long-term strategies — and they are focused on digital.)

AOL, in contrast, has no industrial assets, so has the latitude to invest in journalists. They also have another huge asset that newspapers enjoyed in their geographic distribution areas that they entirely lack on the web: SCALE

A notable illustration of the shifting value of news company assets that sits between AOL and most newspaper companies is Politico.

Politico rose to prominence by showcasing its high profile journalists on its website. 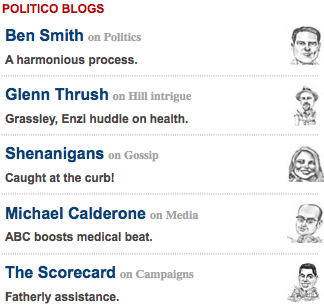 Unlike most news sites, Politico has real profile pages for its journalists and showcases their bylines on every story (even the lead homepage story):

This doesn’t mean, however, that Politico derives no value from industrial printing and distribution. In fact, half of their $15 million in annual revenue comes from a print edition published three days a week when congress is in session, and once week otherwise (via Vanity Fair).

But Politico doesn’t own any printing presses or delivery trucks, i.e. no industrial assets. And the print publication is largely the product of content produced first for the web — and it is very much a “nichepaper,” i.e. it targets the highly valuable audience of Capitol Hill staffers and members of Congress.

The results is that Politico is able to invest in a talented newsroom staff of 100, paying nearly as much as The Washington Post. And Politico is profitable.

But does focusing on journalists as news companies’ most valuable asset mean that news companies should be exclusively in the content production business? That’s a significant shift from the industrial printing and distribution business.

In the digital media world, companies like Google and Apple have taken over, as Columbia J School Dean and former WSJ.com managing editor Bill Grueskin put it, the “profitable front end of the distribution chain,” leaving news companies with the much less profitable back end of the value chain (i.e. content creation).

But what if journalists could also be the key to news companies getting back into the distribution business, in digital media?

The greatest asset of Google, the most successful content distribution business on the web, is its ability to harness the judgment of every person who creates a hyperlink on the web, and to know which links from which sites represent more trusted judgment.

So how can news companies leverage the asset of their journalists’ news judgment?

Could journalists be the key to not only creating the content but also packaging it?

Think about that for a while. More in another post.