washingtonpost.com has launched a new politics page called Political Browser, which features, wait for it… links to the most important and interesting political news around the web. That’s right, the Washington Post, one of the paragons of original political reporting, has dedicated a page to help you find the best of OTHER news organization’s political reporting.

I spoke with Eric Pianin, the Politics Editor for washingtonpost.com, who explained that The Washington Post sees an opportunity to extend their highly respected politic news brand to filtering the political web.

And filtering is a BIG opportunity on the web.

In fact, Political Browser was born of a determined effort by The Post to get into the news aggregation game. Eric told me that interest in news aggregation extends to the highest level of The Post’s senior leadership, including Katharine Weymouth — they have been “fascinated” by the success of aggregation sites like Drudge, Huffington Post, Hotline, and others.

Eric acknowledged that washingtonpost.com is “late to the party,” but in fact the Political Browser puts the Post way out ahead of many other news sites — while many have begun to recognize the value of aggregation and links, most have been slow to act.

As Eric points out, it’s “not just aggregation.” (Heck, any algorithm can do aggregation — that’s increasingly a commodity.) What Political Browser has set out to do, according to Eric, is put The Washington Post “stamp of approval” on the choice of stories, and to provide “insight” into what’s important in the sphere of political news on the web.

Also looking beyond commodity aggregation, The Post believes, with good reason, that a lot people who are interested in political news and in the Post’s political reporting would find it interesting to get “inside the heads” of Post journalists, to see what they are reading and what is informing their reporting. 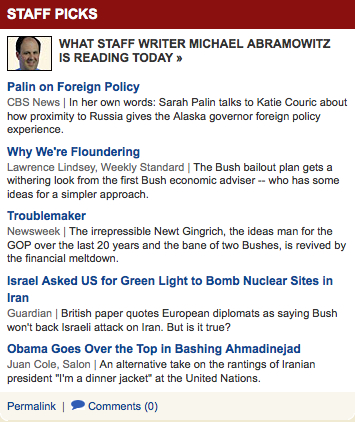 What are E.J. Dionne, Eugene Robinson, and other Post journalists reading that’s informing their perspective? Political Browser is taking the Post down a path where we can find out.

Political Browser is about the “news judgment” of Post journalists — and isn’t that, at the end of the day, what reporting and editing have always been about?

And here’s the really intriguing news — Eric reports that Political Browser is generating a lot of interest among Washington Post editorial staff to take part in the news aggregation effort, to influence what stories get linked.

And it makes sense — what journalist wouldn’t want to tap into a new vehicle for influence? And The Post aims to make Political Browser a major influence in the political web.

Political Browser’s Required Reading section synthesizes the judgment of The Post’s politics staff about the most important political stories of the day:

An essential feature of the Required Reading section are the brief comments that accompany each link. While the choice of stories is the core value, it’s The Post’s comments, summing up the significance of the story or adding perspective, that make Required Reading a unique and valuable editorial feature. It’s like a mini link blog — something that every news site should be doing on all of their topic pages. (Something that every journalist, really, should be doing.)

Required Reading may include a link to a Post story, but not necessarily — and that makes the feature an honest broker, avoiding conflict of interest with The Post’s own original content.

There is a section, Best of The Post, that exclusively links to Post political stories, but even this feature is groundbreaking in its own way. Most topic pages on news sites display a laundry list of ALL content. Here, the Post applies the same filter to its own content, helping to prioritize your reading. 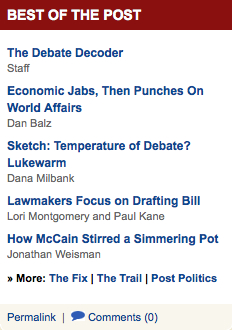 The anchor of the Political Browser is The Takeaway, written by Ben Pershing — as Eric describes it a “clever, breezy, irreverent, but highly informed” look at the most important stories and buzz on the campaign trail. 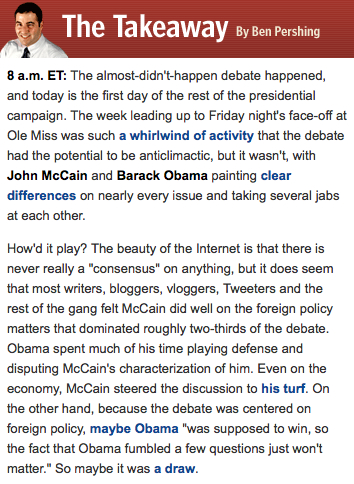 It’s a classic link blog, featuring plenty of links and attitude, and serves, as Eric points out, as a complement to the Post’s other successful political blogs.

Work on The Takeaway begins at 8 a.m. with a first post and extends throughout the day as political news evolves and breaks.

Political Browser has a further assortment of short, punchy link features, such as Trench Warfare, with links to stories and commentary from the left and right. 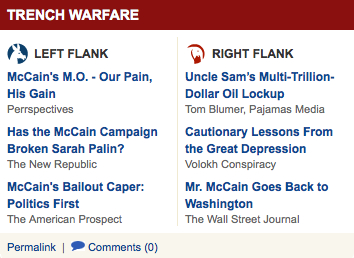 There’s also Blunder Box, i.e. “gotcha journalism” as Eric describes it with tongue in cheek — but it’s done with a link, so that means the blunder is already out there (e.g. this McCain ad declaring victory in the debate, which ran before the debate), so it’s not really a gotcha in the sense that journalists are typically accused.

The effort to compile links for Political Browser begins around 6 a.m. and by 8 a.m. a fresh page is up. Currently, the process involves emailing journalists to see if they have any additional links to contribute. It’s a tremendous step forward that The Post has begun developing an editorial workflow for links, which most newsrooms lack, so that they don’t lose the value of what reporters and editors are already finding in their daily reading.

And here’s where technology could give The Post a competitive advantage in the developing their editorial workflow. A web-based editorial system for links could optimize this workflow and make it easier for journalists in the newsroom to contribute links, and for Political Browser editors to edit and publish those links. Imagine getting the entire Post newsroom set up to do link journalism, to contribute dynamically to the news aggregation effort.

The big opportunity for The Post in leveraging web technology is efficiently tapping into the collective intelligence of ALL of their journalists. Sites like Digg have demonstrated what a powerful and dynamic filter can be created using social web technology to enable people to collaborate on filtering the web. Imagine dynamically connecting the news judgment of the entire Post newsroom — tapping into editorial network effects among journalists.

There’s still so much untapped potential in news aggregation, and The Post is ideally positioned to realize that potential.

Political Browser is only about a week into its new life, so it’s too early to talk about traffic or other such measures of success. But the Post is committed to testing how well they can build an audience for news aggregation and link journalism. And the commitment to experiment is one of the most notable features of Political Browser. These days, all innovation in the news business is experimental by definition. Eric says that they don’t know yet now Political Browser will evolve, which actually increases the chances that it will evolve into an even greater innovation.

Still, attempting to build an audience for a page of links, as an influential destination, feels like a good bet to be making on the web.

One immediate response The Post has seen is other news sites getting in touch to discuss reciprocal linking deals. Of course, linking in the form of “deal” drains a good deal of the editorial value — in fact, you might argue that such arrangements compromise the editorial independence of the link journalism. If Political Browser links to Politico, you want to know it’s because the Browser’s editors think the story is worth reading… not because Politico is linking back.

What would be much more interesting is an open editorial system for exchanging links, where sites could get links to their content on other sites based on editorial merit rather than deal making. Think of it like a newswire for links.

What’s most radical about Political Browser is that the Washington Post has committed to creating significant value with their editorial brand beyond their core mission of original reporting.

But how better to unlock the value of The Post’s brand on the web than to apply human editorial judgment to the challenge of filtering the web? Algorithms can beat humans at comprehensive web search, but humans should be able to beat algorithms at news aggregation.

And I would argue that the links on Political Browser are a form of journalism — and that news aggregation and filtering the web will be an essential function of news organizations going forward.

As Philip Meyer observed in AJR:

The old hunter-gatherer model of journalism is no longer sufficient. Now that information is so plentiful, we don’t need new information so much as help in processing what’s already available. Just as the development of modern agriculture led to a demand for varieties of processed food, the information age has created a demand for processed information. We need someone to put it into context, give it theoretical framing and suggest ways to act on it.

It’s a radical idea, still, for many news organizations. But not for The Washington Post — they are aiming to excel at BOTH, at the original reporting that surfaces essential new information AND at processing the information that’s already available.

Of course, filtering the web with links is not really a radical idea for the thousands of journalists who read Romensko every day or who chase after links on Drudge.

They just need the courage to try it themselves.