What’s the most obvious sign that a traditional news brand is merely reproducing online what they do in print, instead of publishing in a way that makes sense for the web? They way news is organized on the homepage.

TechCrunch is published using blogging software, so the stories on the homepage are presented in reverse chronological order — this is an approach to news publishing pioneered by blogs (through the software’s default functionality) that is truly web-native.

Why publish in reverse chronological order on the web? Because news is 24×7, breaking throughout the day. Which means that news consumers come to a news site more than once a day — checking the homepage is just a click away, and news consumers on the web click often.

When someone visits a news site on the web, what’s the first thing they want to know?

TechCrunch publishes multiple posts per day, but when you visit TechCrunch’s homepage, you can always figure out what’s new, because it comes first.

This approach aligns with RSS syndication — a news feed is a chronological stream of stories.

Now let’s look at Digg, which also presents news on its homepage in reverse chronological order. This can be disorienting to new users, because the number of Diggs are not in order. But it works great for power users who visit the site multiple times a day, because they can easily see what’s new.

Digg takes it a step further, allowing users to rank stories by number of Diggs, displaying what Digg users think is most important.

But it’s notable that Digg’s default is most recent, not most Diggs. This makes sense on the web, where people visit sites frequently throughout the day to check for news or read via RSS.

But beyond the default, Digg’s approach to presenting news is so innovative — and so web-native — because users have the option of viewing what’s new OR what’s most important.

Speaking of which, why isn’t this a feature of blogs — to allow users to rank posts on the homepage by most important or most popular? There’s lots of available data for that ranking, e.g. Alex King’s Popularity Contest WordPress plugin would work, if you wanted to rank by popularity. (Hey WordPress and Movable Type, stop posturing and spend some more time innovating!)

Of course, there are more interesting, distributed models for ranking importance (see Digg), but even ranking by most popular would be a worthy start.

Now let’s look at the New York Times. It’s homepage is arranged, like most traditional media brand sites, by what is most important.

Here’s the problem — if you visit the New York Times throughout the day, and no important news has broken, the homepage remains largely unchanged, static, like a print newspaper.

Organizing news by importance as the default makes sense when you’re only delivering the news once a day (and the “default” is all you get). But when news publishing is continuous, it’s not the best way to server frequent news consumers.

I used to take breaks to check the homepage of NYtimes.com throughout the day, but I stopped doing it when too many times I came back only to find the homepage hadn’t changed much — or at all.

Imagine — I’m visiting the homepage of the NYT, archetype producer of original content, and they didn’t seem to have anything new.

To be fair, NYTimes.com, like many other traditional news brands, have embraced blogs, which do display the stories in reverse chronological order. In fact, the NYtimes.com is now publishing a prodigious amount of blog content — but you wouldn’t know it going to the homepage — you have to go looking for it in the blog ghetto.

Why should NYTimes.com’s web-native publishing be relegated to one corner of the site? Why shouldn’t the WHOLE site — especially the homepage — be aligned with the web, instead of aligned with the static print product?

Dave Winer, who first got the NYT to adopt RSS, has been advocating this forever with his NYT “river of news” publications.

So here’s another challenge to print publishers with websites: When are you going to become web publishers with print products, i.e. care more about your web readers than your print readers? Or at least do what makes most sense for each medium?

If traditional news brands were really up to the challenge, they would listen to Howard Owens advocating blogging as the key to transforming how editors and journalists think about creating content on the web:

Too many publishers, or more to the point, the editors and reporters they employ, still see online as just another place to shovel the same journalism they’re doing in print or in broadcast.

If traditional news brands REALLY wanted to embrace the web, they would make their homepage into a blog — or even better, make it like Digg, so users can view content ranked by most recent OR most important.

Want your readers to check your site’s homepage frequently for news? Then show them what’s NEW.

Of course, you could argue that the entire notion of a homepage has radically changed on the web. Here’s my new NYT homepage:

And this is the other homepage the New York Times cares about: 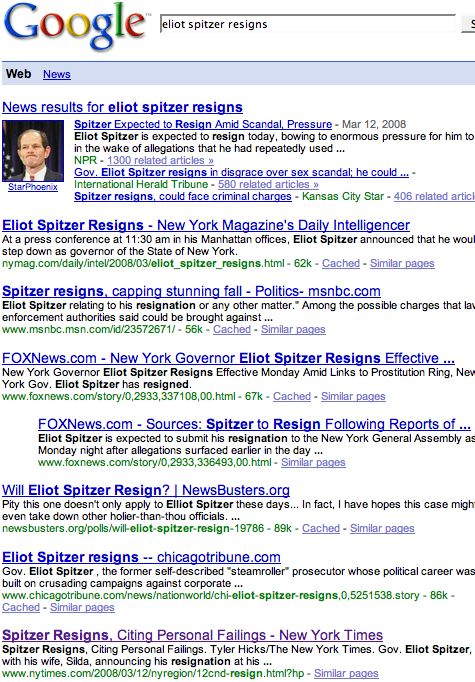 With all that NYT’s web savvy, why not take the many NYTimes.com homepage out of the newpaper and actually put it on the web?

Quick clarification — adopting elements of Digg doesn’t necessarily mean letting readers decide what’s most important (although it certainly could). The element I wanted to emphasize in this post was presenting news in reverse chronological order by default, and give users the choice of whether to sort news by date or by importance, i.e. web-native news presentation.

How importance is determined is a whole separate — and “important” — discussion.