A cornerstone of journalism has always been reporting what key sources say, put in context and given perspective, alongside reported facts.

It’s time to reinvent that process on the web — make it dynamic — using the fundamental mechanism for connecting information and people: the LINK

“Do what you do best, and link to the rest” is Jeff Jarvis’ motto for newsrooms — the imperative is to reorient newsrooms from a resource-rich, monopoly distribution approach to reporting, where a newsroom could reasonably aim to do it all themselves, to a resource-constrained, networked media reality, where newsrooms must focus on original reporting that matters most — SUPPLEMENTED by links to other original reporting done by other newsrooms — and by individuals.

The idea is that journalists, editors, and newsrooms need to LEVERAGE the web, leverage the network to help them do more — in so many cases now, with less.

But I would take Jeff’s web-savvy advice a step further:

“Make linking to the rest an essential part of what you do best.”

Robert Niles at Online Journalism Review has a practical guide to linking on the web, where he observes:

Ultimately, the addition of useful hyperlinking within an online news story reflects the strong reporting of its author. If a reporter does not know of online pages with extra information relating to the story, he or she cannot link to them. But if you have that information, why not share it with those readers who are eager for it?

Again, I would take this a step further — links aren’t just a fundamental element of the reporting.

Links can BE the reporting.

Jack Lail at Knoxnews.com — still setting records for speed and elegant simplicity of innovation — sent me this example: 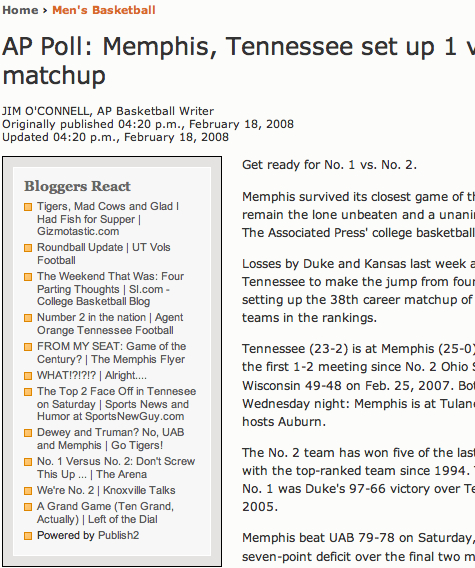 Jack took a commodity AP story, available on dozens of other sites… 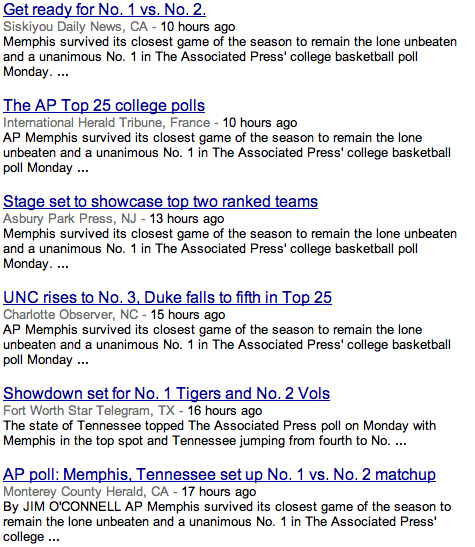 …and used Publish2’s news aggregation platform to transform it into an original piece by REPORTING on what local TN bloggers were saying about the story. But he didn’t pull a bunch of quotes, as he would in a traditional news story — instead, he LINKED to the sources, creating an order of magnitude more value for a news consumer on the web (who, as Robert Niles says, are “eager for it” — just ask Google).

This is networked journalism — this is LEVERAGING the network.

But Jack wasn’t content to just make links an editorial supplement — for his next trick, he made the links THE STORY:

This “article” was in our Top 10 articles on Tuesday for the combined knoxnews/govolsxtra sites. 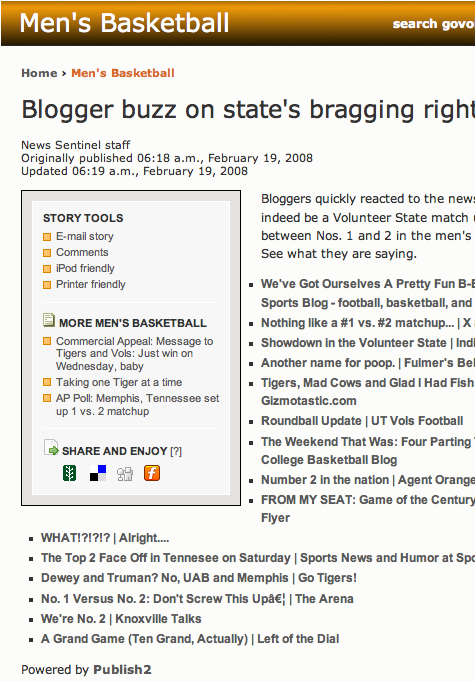 Here is a striking example of links supplementing a heroic original reporting effort, and of embracing innovation in the midst of covering deeply challenging news story:

Last week, the Rockford Register Star faced a tragedy in their own backyard with the killings at Northern Illinois University. Rockford did what they do best, reporting literally around the clock to help their shaken community understand what had happened and begin to face the difficult question of why. Their coverage goes on for pages, likely one of the most in-depth collections of original reporting on this story. 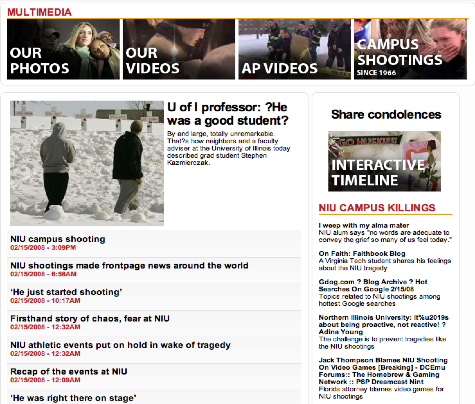 You can see next their original reporting a sidebar on the right that provides links to coverage from around the web. As Jack did, the team at Rockford realized that they had gathered a unique — perhaps even definitive — aggregation of coverage from across the web, enough for it to stand on its own: 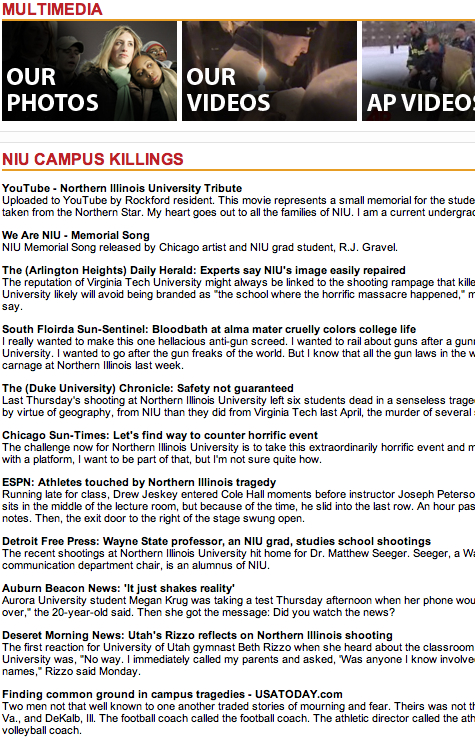 Quick sidebar on the pace of innovation:

The NIU killings occurred on the afternoon of February 14. I got an email from Rockford assistant managing editor Anna Voelker at 1:30am saying they wanted to aggregate coverage of the tragedy from around the web — and “let’s make this happen.” Andy Brown, Rockford’s web copy editor who lead the charge on gathering links to the best reporting from a wide range of sources, followed up at 4:30am with details of what they needed. Web developer Josh Glovinsky called me around 8am and had the Publish2 headline widget up shortly thereafter. (I never asked how much sleep the newsroom had gotten, but I’m guessing not much.)

Hat tip also to Rockford Executive Editor Linda Grist Cunningham for providing the kind of “let’s do it” support and encouragement that newsroom innovation requires, and to tireless innovation champion Howard Owens for introducing me to Rockford — I’m looking forward to working with rest of their team.

Many news organizations and media companies have been — and some still are — wary of linking to other sites. Why would we send our readers away, the thinking goes, don’t we want them to stay here, on our site?

But that’s the funny thing about web — it’s so counterintuitive. The way it works is almost entirely the opposite of how media used to work.

Whenever I speak to media companies, newsrooms, editors, and journalists about the importance of linking on the web, I always use this example (which almost seems a cliche now, but it gets the point across):

This site has been so successful at sending people away, that it’s been able to do very well with advertising: ~$15 billion

Can you guess which site?

Also keep in mind when you think about links as news, links as reporting, and links as editorial product — on the web (thanks in no small part to Google, and its link-based algorithms): Links are influential. Links set the agenda. Links direct public attention. Links connect ideas and people.

Everything journalism has always aspired to do.

I wrote a while back that Facebook is not for business, i.e it’s not clear how an application designed for socializing among students could be used — without any customization — by professionals. There a bit of data and more buzz coming out that

How long does it take to launch an innovative new feature on a newspaper site? About 48 hours — that’s the standard set by innovative editors like Jack Lail at Knoxnews.com, Tom Meagher at Herald News, and Mark Briggs at Thenewstribune.com. About