I somehow got logged out of my NYTimes.com registration and just hit the registration wall when I tried to read an article — I almost forgot it was there. Which made me wonder, now that the TimesSelect pay wall is gone, what the real ROI of this registration wall is for the New York Times and others sites, many of them newspapers, that require registration. 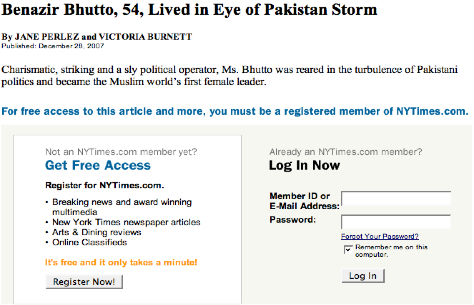 The theory goes that personal data collected from registered users enables sites to better target ads and charge premium rates. But I wonder whether the lost traffic from users who choose not to jump through the registration hoop — which I bet is particularly true of NYTimes’ large volume of visitors from search engines — outweighs the gain of higher ads rates (assuming NYTimes’com is consistently able to charge higher rates).

When NYTimes.com ran the numbers on TimesSelect, they decided that the lost traffic, particularly from search, and the associated lost ad revenue outweighed the revenue from paid subscriptions. I wonder whether they’ve run the same analysis for the registration wall.

Of course, the NYTimes.com registration wall is not costing them search traffic, since they have enabled search engines to crawl the same content that users can see after they register (you can find some information on this practice here.)

But the registration wall likely prevents some non-trivial number users from accessing the site. Many frequent NYTimes.com readers, like me, have passwords saved, but NYTimes.com is clearly focused on growing their readership beyond the current regular readers — and that’s where they likely run into a lower tolerance for jumping through registration hoops.

NYTimes.com claims that registration only takes “a minute,” but it takes more than a minute to decide whether to share all of this required personal information. 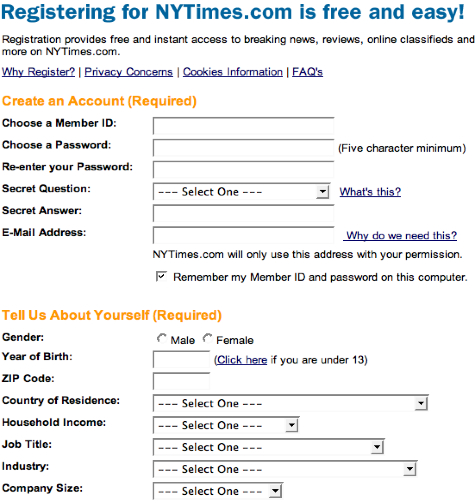 You have to wonder in the age of behavioral targeting networks (I believe NYTimes.com participates in Tacoda’s BT network), which derive user data based on user actions, e.g. what types of content they view, whether creating a content access barrier to collect data about users is really necessary.

Or perhaps it’s more timely to wonder whether in the age of Facebook Beacon it’s necessary to collect user registration data, since Facebook aims to be a marketplace for buying and selling user data. Interestingly, New York Times was one of the first to sign up for Facebook Beacon, although their press release characterize Beacon specifically as an “opt-in” program, and we all know how that turned out (which may have left NYT feeling like they were sold a bill of goods):

Beacon is an opt-in feature that enables users to decide if they want to share their activities from other sites back to Facebook for distribution to their friends. NYTimes.com and some of the Times Company’s Regional Media Group properties (beginning with Gainesville.com, Gainesvillesun.com and Gatorsports.com) will participate in the Beacon program. Boston.com will also participate in the coming months. Beacon gives Facebook members, for example, the option to share their ratings of travel venues featured on NYTimes.com with their Facebook friends.

You could say that Facebook and other social networking sites represent the next generation of requiring user registration — they are basing their entire business model on monetizing user data, since selling ads next to user profiles has generated little profit or sense. Facebook Beacon would have allowed Facebook to do all of the user data collection “dirty work” — perhaps it still might. Certainly the $15 billion valuation depends on it.

That said, there’s clearly a tension right now in the online media business between removing friction from user access and content discovery, and maximizing content monetization. The trend seems to be towards removing friction with more unfettered access, but the monetization models have yet to catch up.

Google, of course, still has the perfect model, whereby users willingly hand over their “data” in the form of search keywords, which power Google’s AdWords money making machine — no registration required.

It may be that NYTimes.com and other publishers that require registration have determined that the registration data is still paying off — it would just be interesting to see the numbers.