I happened to visit Facebook’s Business Solutions page, and was struck by how, at least on the surface, these advertising formats seem like exactly the kind of innovation that should be helping Facebook achieve Goolge-style revenue — which is of course what Facebook’s $15 billion valuation assumes will happen. 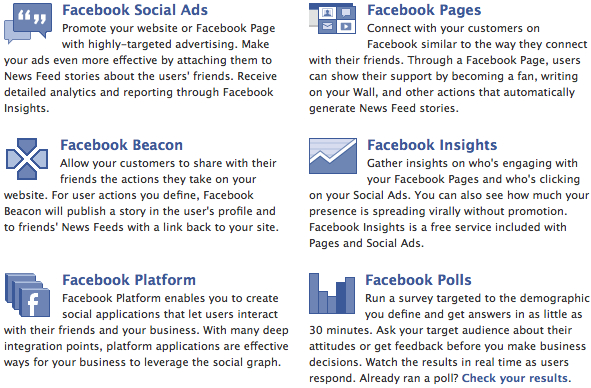 And yet with 100 MILLION users, Facebook’s 2008 revenue was only projected to be $300 million. (The number may higher, haven’t seen, but it would be big news if it was much higher.)

Can you imagine a traditional media company with 100 MILLION viewers/readers/subscribers and only $300 million in revenue?

Which leads to the question that should be on the mind of every media executive, from startups to big legacy players:

Thinking about that question, I went over to Google’s Advertising Solutions page to compare the way AdWords is described to the way Facebook’s offerings are described. 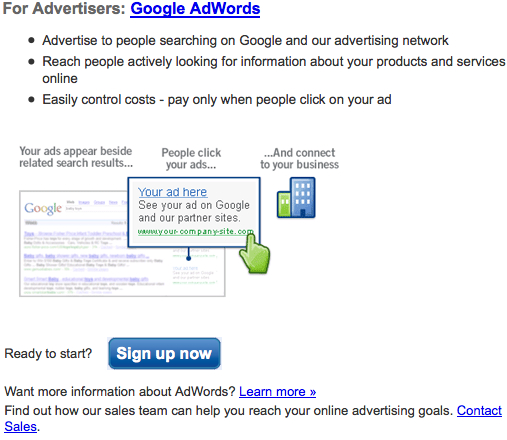 Promote your website or Facebook Page with highly-targeted advertising. Make your ads even more effective by attaching them to News Feed stories about the users’ friends.

Connect with your customers on Facebook similar to the way they connect with their friends.

With Google you can reach people who are looking for precisely what you have to offer.

With Facebook you can insert your ad into news about peoples’ friends. You can let people share their shopping habits with their friends. And you can, as a company/brand, be “friends” with your consumers.

What’s the key difference between Google’s value proposition and Facebook’s?

With Facebook, if you read between the lines, it’s really the same value proposition as traditional advertising — advertisers forcing themselves on users, in a way that creates little or no value for the users.

How many Facebook users have a burning need to find ads in their friends’ newsfeeds? Or share their shopping habits? Or make friends with brands?

On Google, when you search for something, the adds are a form of search result — i.e. something you asked for, that you opted in to receive.

On Facebook, the ads, despite all the innovation, still aren’t something users are really asking for.

Is it possible on the web to have a more perfect alignment between advertiser and user value than search advertising?

I don’t know, but it seems a pretty safe bet that Facebook’s ad formats aren’t it.

(And pre-roll video advertising sure as heck ain’t it.  Could there be anything more antithetical to the fundamental web experience in the broadband era than having to wait 15 seconds to access the content you’re trying to load?)

If you’re in media in the web era, you’d better be working on a business model that creates huge value for users. Either that, or be content to have a small business by traditional media standards.