I’ve only had a post reach Digg’s homepage once, back in 2006, and I see no great loss if it never happens again. Why would I forgo those thousands of visits? Because Publishing 2.0, like most niche blogs, is essentially a trade publication (to use traditional media labels), and just as my content has little relevance to Digg’s niche audience, so too does Digg’s audience have little value to Publishing 2.0.

What I’ve just said might come as a surprise to many niche blogs and traditional media publishers who play the volume game when it comes to selling the value of their online audiences. Many tech blogs report audiences measured in shear volume, i.e. hundreds of thousands or north of 1 million, and those numbers are goosed by avalanche traffic from Digg.

The problem is that from a trade publishing ad sales perspective, there’s limited value in raw volume. Trade publishing is all about targeting and focus. Most Digg users are still in high school or college, and are therefore unlikely to have any B2B purchasing power, so they have questionable value to the B2B advertisers on many tech blogs — particular those that cover the BUSINESS of technology.

Of course, tech blogs have CORE audiences that are highly relevant to their advertisers, but the traffic from Digg adds little if anything to that value, and in fact can potentially dilute the value for publishers that sell on a CPM basis.

This is not to say that there aren’t blogs and other online publications that benefit greatly from Digg traffic — for gadget and gaming blogs, Digg traffic is hugely valuable, because Digg users are certainly interested in gadgets and games, and they probably buy them in large quantities. Some types of political stories do well on Digg, as do stories of the weird.

But for most publishers outside of Digg’s audience niche — which comprises mostly male, school-age tech enthusiasts with liberal political views — there is little overlap or relevance.

Here’s an example of Publishing 2.0’s low relevance to Digg’s audience and vice versa. I wrote a post about the future of print publishing and paid content, which was linked to and discussed by other bloggers who cover this top. The post was submitted to Digg and received 61 Diggs before failing to reach the homepage — a process I call “waiting for GoDigg”. I’ve had many posts creep up to the top of Digg’s upcoming page, only to fail to clear the homepage threshold before the 24 hour expiration, reflecting a lack of interest among Digg users. 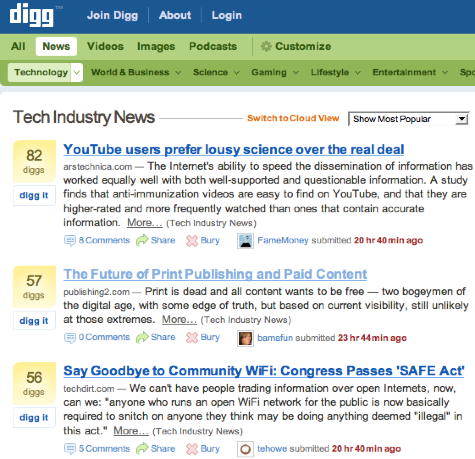 Of course, I could write posts that would be more likely to appeal to Digg users, but then I’d have to go pretty far off topic for the readers of this blog, and I see little purpose in diluting Publishing 2.0 like that.

So there was really no loss here on either side. And the same is true for the vast majority of publishers who have put the Digg This button on their content.

A notable example is WSJ.com, which took what for them was the radical step of adding the Digg This button AND making the content free for Digg visitors. You can see for yourself what the results have been. A random sampling of WSJ.com stories on Digg shows single or low double digit Digg counts and very little attention — even for an iPhone story:

Again, this isn’t the least bit surprising. WSJ.com content wouldn’t do well syndicated on a gaming blog either.

Publishers who want to figure out whether Digg’s audience has any value to them should watch the following video — lyrics here. (RSS and email readers will need to click through to see it.)

Digg has certainly demonstrated the power of the social news model, with the ability to efficiently direct large volumes of traffic. And for some publishers and advertisers, attracting Digg’s school-age, tech-obsessed audience has huge value. But most publishers outside that niche should be wary of investing too much strategic focus on Digg. (Unless, of course, you’re looking to game the system.)

If Digg could break out of its niche an draw a more diverse audience with diverse interests, the equation might change — Digg could become a truly powerful force on the web, driving value to all publishers. But at this point in Digg’s evolution, it’s unclear whether that will ever happen.
**
UPDATE**

An appropriately ironic footnote — this post received 33 Diggs before failing to reach the Digg homepage. 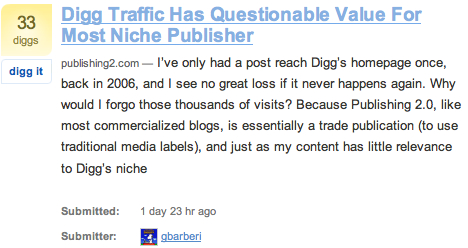