As newspapers struggle to transform themselves into digital media publishers, many have begun to produce online video, in some cases going head-to-head with local TV stations for traditional newscasting. Newspapers have struggled with the transition to digital because classified ads, their cash cow, are available for free online, and because they can’t command the same kind of monopoly pricing for display ads. But online video advertising is one format of online advertising where publishers can still command a premium. Might there be hope for newspapers in challenging local TV stations for video advertising dollars?

Broadcasting & Cable has a great write-up of the newspaper video phenomenon:

In the race to capitalize on the popularity of broadband video, newspapers are continuing to take a page from TV stations? playbooks by producing increasingly sophisticated newscasts and other Web programs. And although the newscasts may not pose a threat to stations? ratings, newspaper executives are hoping they will help secure their lead over broadcasters in the battle for local ad revenues on the Web.

Local TV stations are dismissive of newspapers venturing into the video medium, asserting that they just don’t have the talent assets:

?A lot of what goes into a TV newscast is the appeal of the presenters because of their communication skills,? Horlick says. ?If you don?t have credible presenters, [the user] can just click on the stories. I?m not terribly concerned with newspapers as competition with their newscasts.?

That may be true for now, but there’s no reason why newspapers can’t develop the talent to do video well, as some have already done — and in many cases it may not matter, as the online video grew to prominence through the wide distribution of low production value videos. The content still needs to be compelling, but the standards for successful online video may be very different from that of traditional broadcast TV.

Here is the Miami Herald’s edgy What the 5! newscast, which seems well-produced, although I think they are making a mistake of doing non-local stories like cell phones for dummies, MySpace vs. Facebook and the final episode of the Sorpranos. They need to be focusing on unique local content, which they have done to some degree, but not exclusively.

Here is HamptonRoads.tv, which also seems well-produced, and includes an ad for a local car dealership, demonstrating that they are already getting local TV ad dollars. The newscast also includes a nice cross-promotion to a story from the newspaper (almost makes you want to say “synergy.”) 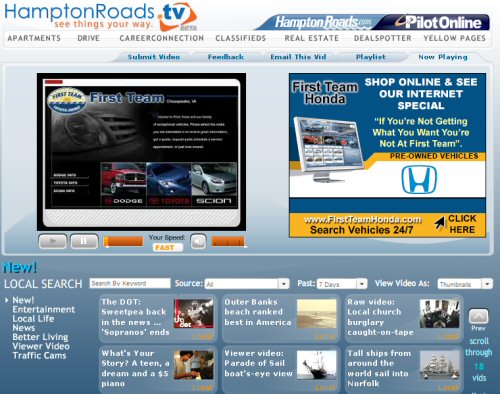 A big issue here is scaling and cost structure — newspapers have the advantage over TV in that they aren’t obligated to broadcast all day — they can create highly targeted shows that have the greatest potential to differentiate from other video content (and that have the greatest advertising potential). Again, I think the key is to focus on local topics.

But it’s still not cheap to produce video, especially above a purely amateur standard — but it’s cheap to distribute video online, so newspapers may need to consider shifting some of the resources they use to produce and distribute their paper product, at great expense, to the production of online video.

Speaking of cheap distribution, newspapers with video are missing a huge opportunity for free distribution by making their video players embeddable by local bloggers.

The overriding question is whether focus on video can help newspapers with the transitioning their businesses from print to digital — without going out of business. The TV business is in the midst of the same painful transition as newspapers, so it’s not as if there are established models to follow. But that’s why this may be a golden opportunity for newspapers — if online video ends up being a lucrative business, newspapers can compete without the infrastructure overhead that broadcast TV has — just as native online publishers have done to newspapers.

If you look at the top online news sites, you’ll see that Internet Broadcasting, which provides infrastructure for local TV station sites, is high on the list, but the top newspaper chains combined (Gannet, Tribune, McClatchy, MediaNews) actually have greater reach (via Cyberjournalist, which provides these numbers from Nielsen on a regular basis):

Hearst-Argyle Television just signed a distribution and advertising deal with YouTube — clearly there’s money in them there hills. Newspaper, with their strong local brands, should think seriously about going after it in a big way.