Every media company is positioning itself to benefit from the increasing shift of ad dollars from offline media to online and digital media, but in many cases ad dollars aren’t moving online in a 1-to-1 ratio. That’s why newspapers, for example, still get 80-90% of ad revenue from print, an artifact of monopoly pricing that doesn’t exist online. But the change in advertising economics from offline to online sometimes results not just in a deflation of ad spending but in the abandonment of ad spending.

Here’s a small but telling example:

AUGUSTA (May 23, 2007): A legislative committee has voted 11-2 in support of a bill that would no longer require the state to put legal notices in newspapers, and instead use the Web to keep the public informed â€“ a plan opponents say would leave those without an Internet connection out of the loop.

The bill is being sponsored by Rep. Teresea Hayes, D-Buckfield, as a way to save state government an estimated $750,000 a year â€“ money that newspaper executives readily admit would hurt their bottom lines.

It would require the state to maintain a Web site to post those notices, including upcoming public hearings on legislative bills and rule changes proposed by state departments and agencies.

State agencies aren’t exactly billion dollar ad spenders, but they are part of the traditional advertising ecosystem. Now that a state agency can create its own media, i.e. just put up a site, findable by search, there’s no need to pay other media, i.e. newspapers, to distribute the information to the public.

On the other hand, it may be that the ad revenue still exists, just not in the same form. Here’s what you get when you search on Google for “public notices augusta“: 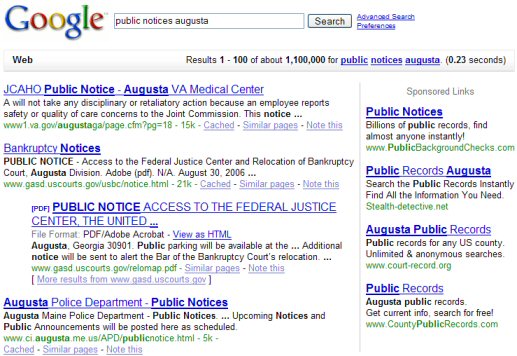 The ad revnue is indeed there — it’s just going to Google instead of local newspapers.