I received this offer in the snail mail this week from the New York Times: 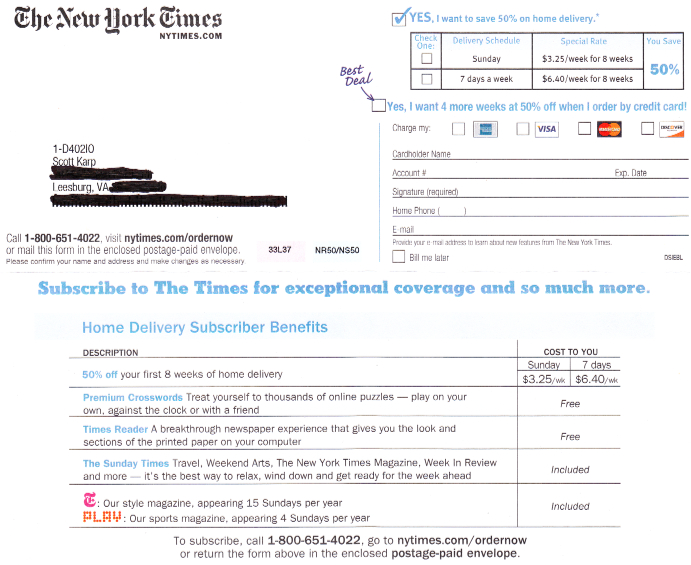 As I observed previously with my critique of the Washington Post’s circulation marketing, this marketing piece gives me, an avid reader of NYtimes.com, no explanation whatsoever as to the value of also receiving the New York Times in print (with the exception of receiving free access to some premium online services, which has nothing to do with the value of the print edition itself).

It appears the objective of this marketing pieces is strictly to convert people who already read the New York Times print edition or who are predisposed to read newspapers in print — and we all know this group of people is shrinking. For the six-month period ending March 31, 2008:

The New York Times is clear trying to bolster this declining print circulation by marketing to prospective non-local subscribers like me. The problem is that as a reader, I have little or no value to local New York City advertisers, especially classified advertisers.

This presents a quandary for “national” newspapers like the New York Times, particularly in light of the online readership of NYTimes.com.

Nielsen’s numbers are estimates, but assuming they are directionally correct, think about the orders of magnitude we’re talking about here: 1 million vs. 18 million

And yet it’s not. This is the ten percent problem.

I’m still more valuable to the New York Times as a print subscriber than and as an online reader because my advertising value is still so much higher in print — despite my not living in New York City.

But why aren’t these newspapers’ online businesses 10x larger than the print businesses instead of 10x smaller?

Newspapers had a monopoly over print advertising in a defined geographic area, which provided a lot pricing power for ads that were uniquely local and uniquely suited to print, e.g. classifieds.

Look carefully at the online advertising formats of most newspaper websites, and you’ll notice two things:

Take a look at the New York Times online ad formats. It seems like an impressive product list at first, but what it boils down to is a fancy list of display ad offerings.

And how many other places can you buy display ads on the web?

Which gets to the problem of non-local readers.

In the market for local advertising on the web, newspapers are competing with other traditional local media companies, e.g. TV station, as well as with new web-native local publishers, and with search engines — this is a newly leveled and expanded competitive landscape, but still limited.

For non-local readers, on the other hand, newspapers are competing with hundreds, even thousands of other content sites.

That’s why the NYT’s 1 million print readers are more valuable than their 18 million online readers.

For example, here are the NYT print rates for the Technology category: 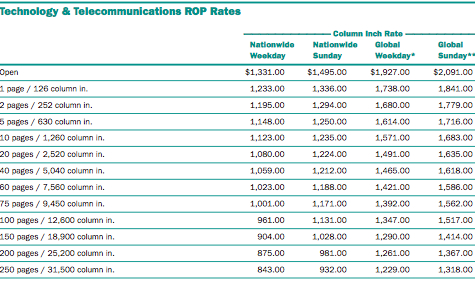 Compare that to the $15-40 CPMs that TechCrunch gets for displays. Imagine what TechCrunch’s business would look like if it could command $144 CPMs.

So given that the New York Times can charge 3-4 times as much to show me a technology-related ad in print than TechCrunch can charge online, is it any wonder that they are trying to convert me to a print subscriber?

The issue is even more acute because at least TechCrunch can prove that the ad was displayed, even if I didn’t pay attention to it. NYT can’t even prove that I didn’t throw the paper straight into the recycling bin.

It would seem this is a market anomaly that can’t last.

So what should newspapers with a national audience online do?

Well, one obvious choice is to stop trying to be both a local and national (and even global) media company. The problem is that for companies like the New York Times, the local newspaper supports the global news enterprise — but that state of affairs is in rapid decline.

Another choice is to produce a local print product that MORE people want to read, not fewer — the perceived infallibility of the current declining print product is a subject for another day.

There’s one other choice that you don’t often hear discussed: Find new ways to create value for advertisers online.

That’s what Google did. The value proposition of search advertising has no analogue in print or anywhere offline. That’s where the pricing power comes in.

So how can newspapers and other news brands create unique value for advertisers on the web?

I’ll have to get back to you on that one.