Last week, Inform announced that a number of high profile media companies would be using its technology to aggregate third-party related content on article pages. Sphere, which has a widget that aggregates third-party related content (which I use on this site), is popping up all over traditional media site, including on Time, New York Times, and Wall Street Journal — WSJ is actually displaying the third-party links on the article page, in addition to through the widget. 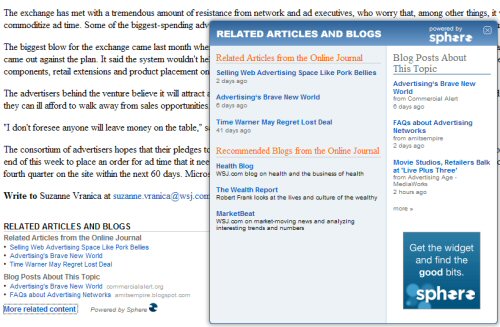 Today, CNN announced it would start aggregating links to third-pary content as part of a planned redesign:

Perhaps an even bigger shift in philosophy will happen later this year when CNN.com will begin linking to other news sites, even competitors.

Whether users of traditional media sites will find such sufficient value in these aggregation plays that they will click on those links rather than search on Google or seek out another pure play aggregator still remains to be seen. But it’s clear that media companies understand that the big opportunity for them is in organizing the sea of content on the web rather than just organizing their own content.