The counterintuitive plan–presented Thursday by the company’s Chairman and CEO Randy Falco and Chief Operating Officer Ron Grant during a Goldman Sachs conference–is intended to make AOL a less cluttered and more inviting environment for users, and a more effective platform for advertisers.

Grant described it as the “uncluttering of the AOL environment.” And while the inspiration for the initiative was putting the consumer first, Grant insists it also has a positive impact on advertisers.

“Our ads are delivering better value for our advertisers,” he said.

AOL is betting that they’ll net more revenue by charging a higher CPM across a smaller inventory — it’s simple algebra. Here’s an example of the type of ads that AOL is aiming to replace: 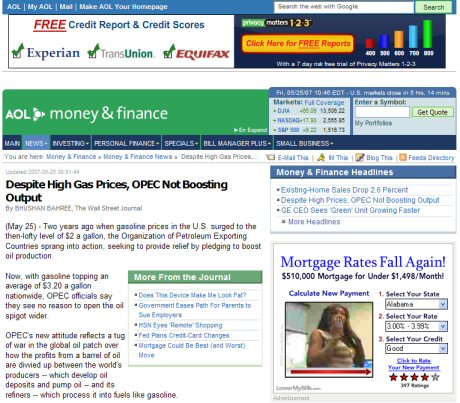 It’s a good bet that LowerMyBills.com and free credit reports are not high CPM ads. What AOL wants — along with Google, Yahoo, and Microsoft — is the premium brand advertising that is still spending the lion’s share of ad dollars in print and TV. To get premium dollars, you have to create the perception of a premium context, and nothing hinders that perception like clutter.