If you thought the social networking market was frothy, online video is rapidly expanding to fill all the bubble space. Jeff Jarvis observed that YouTube has now surpassed MySpace on Alexa (at least in reach) and speculates on who might buy YouTube — he also invited me to comment, and I’m going to take up the challenge by focusing on my favorite obscure corner of Web 2.0 — business models.

In particular, I’m going to focus on business models that reward the “users” who everyone is depending on to “generate” all this video “content.” The following list of business models is by no means comprehensive, but it’s indicative of the rush to figure out how to make (or in some cases lose) money:

**1. Attention
**
Attention has been the most successful form of currency for user-generated online video to-date, which has rocketed YouTube to stardom, and has prompted everyone from Google to Grouper — and now AOL — to get in on the game — even the venerable CNN wants in on the user-generated content action. Of course, CNN is not offering “attention” so much as a chance to participate in “journalism”:

User-generated content has the potential to play a pivotal role in journalism whether it’s online or offline,” Mitch Gelman, senior vice president and executive producer for CNN.com.

The quest for attention has also been the key driver of the social networking explosion, at MySpace above all.

My standing question here is how long users will be satisfied with attention as the only form of recompense — especially since YouTube changed its terms of service to exert more ownership over uploaded content:

Ã¢â‚¬Å“Ã¢â‚¬Â¦by submitting the User Submissions to YouTube, you hereby grant YouTube a worldwide, non-exclusive, royalty-free, sublicenseable and transferable license to use, reproduce, distribute, prepare derivative works of, display, and perform the User Submissions in connection with the YouTube Website and YouTubeÃ¢â‚¬â„¢s (and its successorÃ¢â‚¬â„¢s) businessÃ¢â‚¬Â¦ in any media formats and through any media channels.”

Revver has been a high-profile innovator with this model, offering to share 50% of advertising revenue with users that submit videos.

3. Subscription revenue sharing
**
LuLu.tv’s approach is to get users to contribute a fee to a collective pot, which will be doled out to users proportional to how often their videos are viewed.
**
4. Free bandwidth in exchange for advertising

Red Swoosh’s approach shines a spotlight on one of the key issues for YouTube — the high price of bandwidth. Red Swoosh uses P2P technology to provide essentially free bandwidth — in exchange, Red Swoosh delivers pre-roll ads in any “swooshed” videos. Users can pay for a “Pro” account with no ads.

Red Swoosh appears to be anticipating a moment when successful content creators will start to eschew YouTube and its lack of rights and revenue sharing.

So who will be the winner in the user-generated video game? Just as MySpace is having trouble monetizing its huge sea of user-generated content, I think YouTube and others that traffic in the “America’s Funniest Home Videos” category of online video will continue to get A LOT of attention: 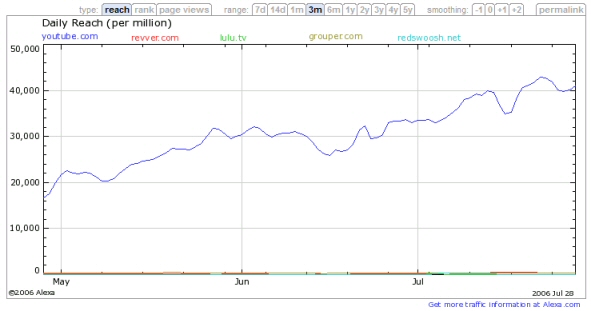 I think the real winners long-term will be platforms that enable a new generation of content producers to break free from the old media content hierarchy and make money from their creativity. As Umair reminds us, it’s all about enabling creativity.

As to the question of who might buy YouTube, Rupert Murdoch has certainly shown a willingness to value online properties based on audience size rather than business models.