It’s happening again — the numbers just don’t make any sense. Facebook turns down $750 million, hoping to hype themselves up to $2 billion. And why? Well, just look at that CASH COW MySpace — it’s making…how much money? I’m on the edge of my seat for News Corp’s first 2006 earnings release, but “in the meantime” we have Peter Chernin hyping it up in Fortune:

In the meantime, MySpace is rushing to add more ad sales people. It had been selling its home page for about $100,000 a day. The price is moving up to about $750,000 a day, according to Chernin, who says he’s been told that Yahoo! commands about $1 million for its prime real estate. 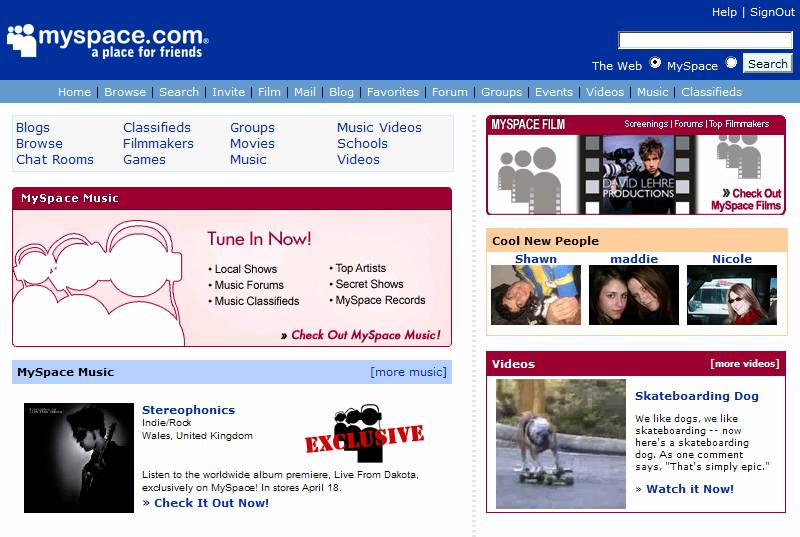 Hmmm. So I started surfing the pages that actually get traffic on MySpace — the pages of individual users, and here’s what I found:

So WHO, exactly, is on the verge of paying $1 million dollars a day?

On my own undeveloped page, I actually did see some blue chip ads from Burger King, H&R Block, Citibank, Verizon, and others — but I can guarantee you that NO ONE is spending time on my page. But at least the content on my page is SAFE.

But if some of the criticism is overblown, Chernin has no choice but to take it seriously. Only if MySpace is seen as an advertiser-friendly site will News Corp. be able to realize its potential. [THAT SOUNDS AWFULLY FAMILIAR] The very tricky challenge for the media giant is to somehow manage MySpace, without taming its cool factor.

“We don’t want to change the cultural feel of MySpace,” Chernin says.

Of the company’s 280 employees, about a third work, at least in part, on online safety issues. They screen photos being submitted to the site and take down profiles of users who are found to be underage. About 220,000 profiles have been eliminated, according to a company spokesman. The company is also experimenting with software aimed at identifying pictures with a high proportion of bare skin, believe it or not.

“We need to be a leadership position about protecting minors on the Internet and, more importantly, giving the parents the tools they need to protect them,” Chernin says.

Bet those 280 employees are a real profit center.

Here’s the real problem: MySpace has the ultimate audience, but it’s taking an utterly 1.0 approach to monetizing that audience.

Some advertisers are being smart and taking their own 2.0 approach to MySpace, like the page Wendy’s created for it’s square burger — but creating a page on MySpace DOESN’T COST ANYTHING! That’s the beauty of user-generated media, isn’t it?

You would think that with an audience about to rival Yahoo’s, MySpace would be swimming in cash like Google, but they only seem to be swimming in hype.

Which leads me to this: What if the best marketing 2.0 strategies for leveraging the social media network are essentially free, and having the audience DOESN’T mean you can “monetize” it.

Maybe MySpace will ultimately figure it out, but heading towards the one year anniversary of News Corp’s acquisition, I’d think twice about spending $2 billion on FaceBook.