Activists of Students for a Free Tibet and Friends of Tibet (India) are not happy with “Google’s collusion with Chinese government in censoring information in China and Tibet.”

They “lead the protest demonstration in coordination with world-wide campaign against google’s censorship bit.”

“‘Google is no longer the colourful and trust worthy we used to think of’ said a young girl participant.” 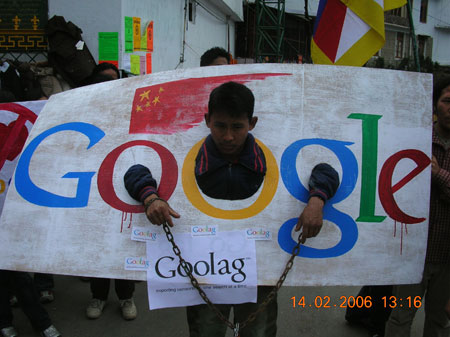 I guess the Google apologists aren’t having as much success in Asia. (Jeremy Zawodny is right about one thing — “The ultimate checks and balances are at work in Google’s case.”)

Google, of course, made no apology in their appearance before Congress:

Rep. Tom Lantos: You have nothing to be ashamed of?

Google [Vice President Elliot Schrage]: I am not ashamed of it, and I am not proud of it…We have taken a path, we have begun on a path, we have done a path that…will ultimately benefit all the users in China. If we determined, congressman, as a result of changing circumstances or as a result of the implementation of the Google.cn program that we are not achieving those results then we will assess our performance, our ability to achieve those goals, and whether to remain in the market.

I’m sure that spin will play well in Dharamsala.

(Kudos to Cory Doctorow for having the guts to call a spade a spade, i.e. characterizing the testimony by members of his “tribe” as “shameful” and “dismal defenses of raw greed at any cost.”)

The market and the internet don't care if you make money