Of all the reasons given why Rupert Murdoch decided to keep the WSJ.com paid subscriber wall in place, the one that I find most interesting is that advertisers are willing to pay a premium for WSJ.com’s audience. If the WSJ went free, it would undoubtedly increase its audience substantially, but how valuable would those new visitors be to advertisers compared to the WSJ current niche audience? 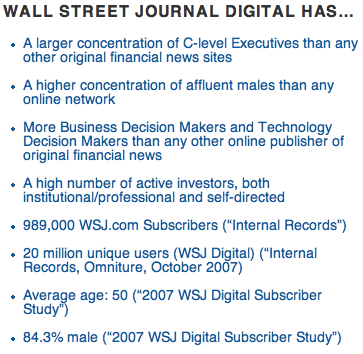 Yes, you can find WSJ readers elsewhere on the web reading free content, but there are few places where such an audience is highly concentrated. Behavioral targeting networks, for example, aim to target niche audiences wherever they go on the web, but many premium brand advertisers remain uncomfortable with the idea of dispersing their ads across a network. It’s much more comfortable, i.e. much more like traditional advertising, to reach a large percentage of your target audience in one place.

The advantage of the web is supposed to be that it’s more efficient than mass media advertising, i.e. reach only the people you want to reach. That’s why search advertising is so powerful.

Yet many sectors of online publishing are caught up in the volume game, battling for more and more unique visitors, but not always succeeding in attracting the ones that their advertisers value. And the more a site’s audience is diluted, the less valuable it becomes.

A Bear Sterns analyst estimated how much the WSJ would have to increase its traffic in order to make up for the loss of subscription revenue.

The analysis posits $6 as the average CPM, which seems low, but it could be an average of very high CPM inventor (e.g. investing, technology) and low CPM inventory (opinion).

The analysis estimates that the WSJ would need a 12x increase in traffic to make up for the loss of subscription revenue — but that assumes the CPM would remain the same, which it wouldn’t.

Here are some examples of ads that currently run on the WSJ, which you won’t see running just anywhere on the web, and which probably wouldn’t yield higher revenue if the WSJ had a higher volume of ad impressions reaching a more diluted audience: 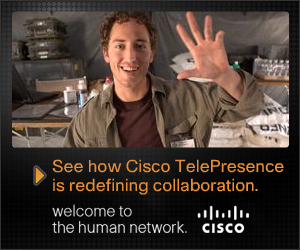 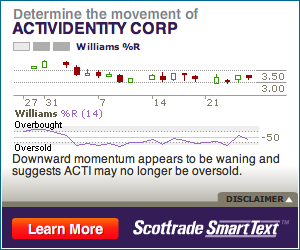 I’ve worked with financial services advertisers who measure the ROI of their online advertising on a particular site by the average size of new accounts attributable to ads on that site. Increasing the traffic to WSJ from all around the web is unlikely to help this metric.

The real test for the WSJ is whether it can maintain this highly concentrated audience as free, high-quality financial information proliferates on the web. Of course, as Saul Hansell points out, the WSJ’s decision is only for now and not for all time:

Of course, there is a lot of very fine free information on the Web. But Mr. Murdoch’s choice is to capture perceived value. Whether the generation of young business people, brought up on Yahoo Finance and Motley Fool, feel the same way about The Journal when they get to the boardroom is an open question. But Mr. Murdoch, and his successors, can much more easily open the doors wider later on than close them.

It seems unlikely that WSJ can retain its high-value audience profile long-term against the lure of the larger web — that is so long as WSJ only offers its own original content.

Imagine the power the WSJ brand would have to point people to the best financial content across the web — just as the New York Times admitted it couldn’t be the last word in technology coverage when it started aggregating technology headlines from across the web.

Would a new generation of executives and active investors pay the WSJ to be the best source of not only original reporting but ALL reporting in their niche?