I’ve had it with all the hype about mobile being the next big thing — more to the point, I’ve had it with the mobile web. Here are five reasons why the web on the go still has a long way to go.

I’m using a Blackberry 8830 on Verizon’s EV-DO broadband network. It’s faster than any other mobile network I’ve ever used. It’s helluva lot faster than an iPhone on AT&T’s Edge network. But it’s still slow. I find myself getting impatient waiting for sites to load, like it was 1997 all over again.

Last weekend, I was trying to figure out how late Costco is open on Sunday. It would have been faster, literally, to call my wife at home and ask her to look it up on a real broadband connection. That’ a sad state.

I traveled to New York last week and encountered no less than THREE WiFi networks, all wanting me to pay $7-10 to access for the day, or commit to $30/month — but how can I commit to a monthly fee if every hotspot is on a different network? National Airport in DC had Sprint. Starbucks had T-Mobile. And then LaGuardia’s Delta Shuttle Terminal had Boingo Wireless (I never heard of them either) — I tried to “roam” with the T-Mobile account I set up at Starbucks, but no luck.

I was in New York again this week at the OMMA conference — I tried to connect apparently outside the conference WiFi and stumbled onto Hilton’s WiFi — $5 for ONE HOUR! WiFi on Amtrak? Yeah, right. I’m writing this from Starbucks in DC following a lunch meeting, where I took it on the chin again from T-Mobile because my Blackberry somehow got unconfigured and I can’t get it to connect as a modem.

Everyone is running around all excited about iPhone and iPod touch WiFi capabilities, and here comes a Blackberry with WiFi. All I can say is better get your credit card out, because you’re going to pay, and pay, and pay again.

Municipalities are getting bogged down in their efforts to provide free WiFi access. You have to wonder whether this is just another government/industry joint venture debacle, or if there are vested interests who don’t want to see it happen.

You would think that in 2007 most sites would be technologically capable of sensing when they are being loaded by a mobile browser and deliver a site optimized for that use. Alas, no. When I loaded Costco.com, I had to scroll through an endless list of links to product categories to get to the page content.

But wait, you will say, what about the revolutionary iPhone, which loads the actual website and lets you zoom in and out with a touch of a finger? What about that, huh?

Yeah, well, remember when everyone had a 800×600 screen resolution, and we used to design websites to fit that width? Why was that? Oh, right, because scrolling is annoying. Looking at a normal web page on iPhone’s 3 inch screen is like surfing the web through a keyhole.

So, great, you can jam the entire NYtimes.com onto the screen — got a magnifying glass? Immediately having to zoom means it wasn’t optimized to begin with. 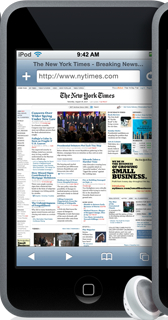 When I load a site on a tiny screen I want to see the information I’m most likely to be searching for, nicely and intuitively formated.

When I visit Costco on a mobile device, what are the chance I’m going to shop? Almost nil. I want store locations, phone numbers, and hours of operation, and I don’t want to stumble through four slow-loading screens to get that info.

4. Mobile device screens are too small

There is a natural tension between the need for a larger screen to engage with the web and the need for a smaller device to slip into your pocket. The iPhone and Blackberry probably come about as close as you’re going to get to striking the right balance, depending on whether you want a physical keyboard.

But even the glorified iPhone’s screen is still tiny. There are many things I simply won’t bother to do on a small screen, and will instead wait until I have access to a large screen — like shop, bank, blog, etc.

Much of what I’ve read about the future of mobile assumes we will do everything on a mobile device that we do on our desktops or laptops, but even if my complaints #1-3 are fully addressed, technology can’t fix the limitations of human eyesight and hand size — at least not for a while.

I think the mobile web will continue for some time to be about getting done what can’t wait until later — like email or looking up store hours or checking headlines or seeking idle entertainment to pass the time.

5. Advertising gets in the way

When pages load with blazing broadband speed, I don’t care if ads load along with them. With a nice wide screen, I don’t even care if ads take up a large portion of the screen real estate.

But on a small screen, all bets are off. Ads that slow down page loading or fill up the screen are going to be most unwelcome, unless they are extremely relevant and useful, i.e. a coupon for what I want to buy in the type of store I’m searching for.

There aren’t many ads yet on the mobile web — other than banners made for the full-screen web that annoyingly load. So this is more about anticipating the suckiness to come.

Real Teen Social Networking: In Person With Cellphones In Hand