To understand why the inclusion of videos on Google News pages — which can be played via YouTube embeds right on the page, without leaving Google News — can be a valuable distribution channel for video content producers, first take a look at this video embedded right here on Publishing 2.0:

I found this video embedded on a Google News page, as part of their trial of this feature with a number of video content producers, including CBS, who have syndication deals with YouTube: 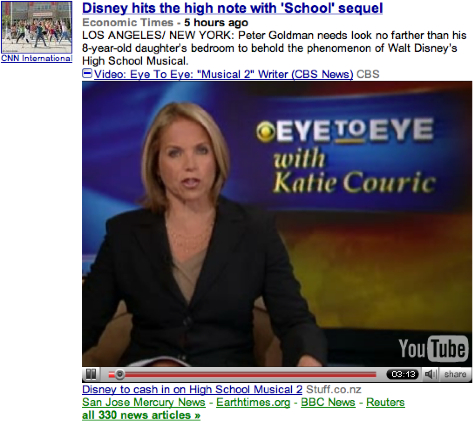 Lastly, read these wise words from CBS about their strategy to broadly syndicate their video content rather than wait for people to show up at CBS.com (which wasn’t happening):

“CBS’s ability to partner with leading next-generation interactive platforms is the best way for CBS to evolve from a content company to an audience company,” said Quincy Smith, President, CBS Interactive. “It’s really all about the user and in building the CBS Interactive Audience Network, we are bringing our content to each unique platform of their choice. In remaining open to all online distributors and community builders – big and small – we can learn more about our existing audience, be exposed to new ones, and flexibly cater to their changing consumption habits.”

It’s not clear to me whether YouTube is part of CBS’s Interactive Audience Network syndication deals, but CBS is clearly using the same philosophy to rationalize having a YouTube distribution channel and, as extension of that, participating in the new Google News video feature.

The reality for video content producers is that they can’t depend on viewers to come to their sites — they need to syndicate their content to where their viewers are. The key to successful syndication is being able to monetize the content wherever it appears, as WSJ did with a pre-roll ad on a video from the All Things D conference that I embedded here (the ad is gone now).

Donna Bogatin gets unnecessarily bent out of shape about the new Google News video feature, siding with Sam Zell’s theory of Google exploitation:

The days when Google News apologists can ridicule Sam Zell’s indictment of Google News’ Google-centric exploitation of the content of others are numbered; The erroneous assumption of a Google News “fair trade” link barter economy is being exposed, step by Google step.

Is Google paying CBS, Reuters, Hearst for its for profit use of their proprietary, copyright videos? Unlikely, as the Google News video insertions come via Google’s no-need-to-pay-for-the-content-of-others-DMCA-fueled “business model” YouTube.

As I’ve demonstrated with the video embed above, it makes no sense to compare the video feature to the core Google news story links because the videos being embedded on Google News via YouTube are videos that are available to be embedded ANYWHERE, not just on Google News.

With the inclusion of videos in Google News, Google has significantly expanded the distribution it is offering content companies with YouTube distribution deals — whether those deals have sufficient revenue sharing on any ads that are syndicated with the video is an entirely separate issue.

The Google News video feature is no different really than Digg’s video pages — the only videos that can actually be played on the Digg site are videos that are published in embeddable players like YouTube, i.e. videos that are intended to be syndicated and played anywhere and everywhere.

For video content producers, rationalizing all of the available distribution channels should ultimately be a matter of dollars and cents. CBS is smart to focus on audience — because that’s how content producers can best value their content in a distributed media world. Ultimately, CBS will sell the audience they reach through Google News as part of their overall audience — and they’ll have to decide whether the deal they have with YouTube allows them to sufficiently monetize this extension of their audience.

Hmmm, what a “coincidence” — right on cue, the news comes out that Google is introducing a new InVideo ad format, which as appears as a teaser at the bottom of the video 15 seconds in. You can click to view the ad in a smaller pop-up viewer, then go right back to your video. (via Marketing Pilgrim)

Here’s an ad for the movie “Hairspray” in an ad that features, well, hairspray:

It’s certainly an interesting alternative to completely interruptive pre-roll ads and forgotten at the end post-roll — but the teaser that appears at the bottom is interruptive to some degree, and I can see it being annoying in some instances. But then, no advertising is perfect — certainly, it’s a worthy experiment.

As of this moment, the “Hairspray” ad has mysteriously vanished from the video above. The New York Times also used this as an example of the new video ad format — OOPS! Maybe it will be back later.

Ah, it seems that when you view the video a second time, the ad does not appears — let me know if you can see it in the clip above.