The Infinite Monkey Theorem (which now has an official name, thanks to Wikipedia) states that given an infinite amount of time, a monkey banging on a typewriter will eventually produce the complete works of Shakespeare. I suppose Wikipedia has proven this true for encyclopedias, but advertising agencies that have open-sourced the ad creation process to consumers have found that they may not have the time to wait for those monkeys to create the next Clio award-winning ad, much less an ad that doesn’t suck (via NYT):

Consumer brand companies have been busy introducing campaigns like Heinzâ€™s that rely on user-generated content, an approach that combines the populist appeal of reality television with the old-fashioned gimmick of a sweepstakes to select a new advertising jingle. Pepsi, Jeep, Dove and Sprint have all staged promotions of this sort, as has Doritos, which proudly publicized in February that the consumers who made one of its Super Bowl ad did so on a $12 budget.

But these companies have found that inviting consumers to create their advertising is often more stressful, costly and time-consuming than just rolling up their sleeves and doing the work themselves. Many entries are mediocre, if not downright bad, and sifting through them requires full-time attention. And even the most well-known brands often spend millions of dollars upfront to get the word out to consumers.

Here’s an example of a user who generated some content for Heinz: 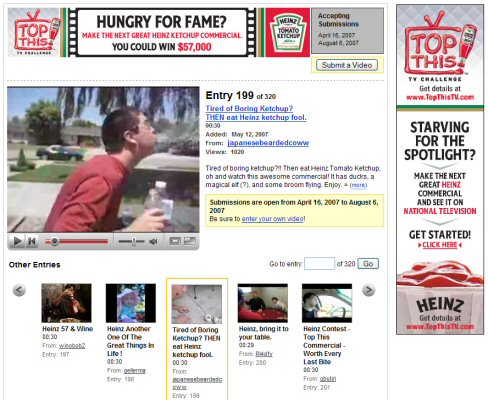 This video is actually kind of funny if you are connoisseur of the intentionally lame slapstick YouTube aesthetic, but probably not ready for prime time. You may be wondering why I didn’t just embed the video here for your enjoyment — well, that would be because they turned that feature off. Heinz wouldn’t want users running off with their content, would they? That’s because the user really isn’t in control.
**
UPDATE**
Turns out the Heinz videos all coexist on standard YouTube pages with the embed feature enabled — it’s just disabled on the Heinz branded page. You have to click on the video title from the Heinz page to break free of the controlled brand environment and return to the user-in-control YouTube environment. So here it is for your enjoyment:

Here’s the thing about user-generated content (other than it being on the face of it one of the dumbest buzzwords ever) — users are people, and people vary wildly in their talent. Heinz may end up with a brilliant commercial that they might not otherwise have discovered, because there are some brilliant people who are aspiring video content producers but who don’t currently work for a big ad agency. Open platforms like YouTube have certainly make talent discovery a more open and “democratic” process, which may indeed reduce the amount of undiscovered t

The Coming War Over Data On The Web