Philipp Lenssen at Google Blogscoped points out the “unfairness” of this new feature with an example of how attention to the top search result for a video on his blog, and thus the potential traffic, is effectively drawn away by the appearances of Video PlusBox results right below: All the media companies focused now on YouTube and Google News should be far more worried about the further disintermediation that this represents. Here’s an example.

Let say you were looking for a video of John McCain’s recent speech on Iraq, so you search in Google for “mccain iraq speech video” — here’s what you get: 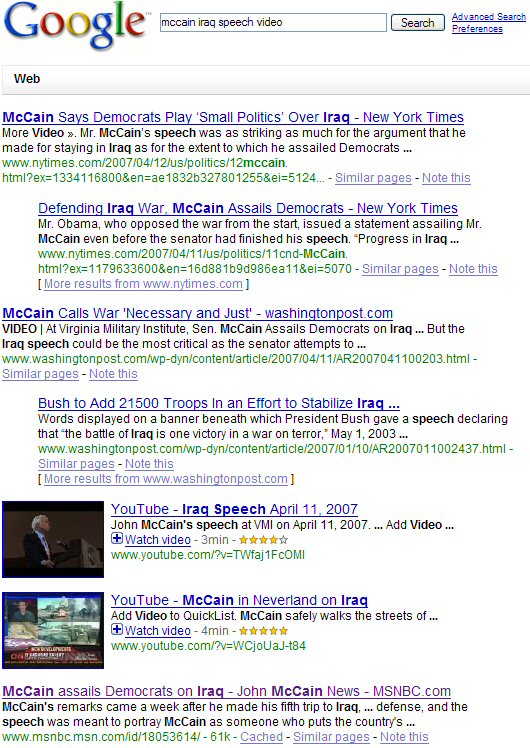 The first two results from the New York Times and the Washington Post, as well as the fourth result from MSNBC, are all text articles about the speech, but each of them links to a video of the speech that plays on a separate video page — WITH ADS: 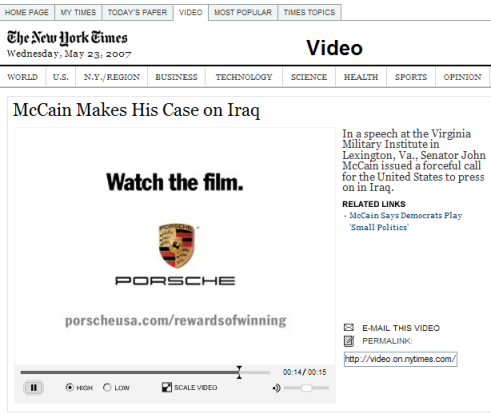 But the same speech is also on YouTube, and can be played right there on the search result page: 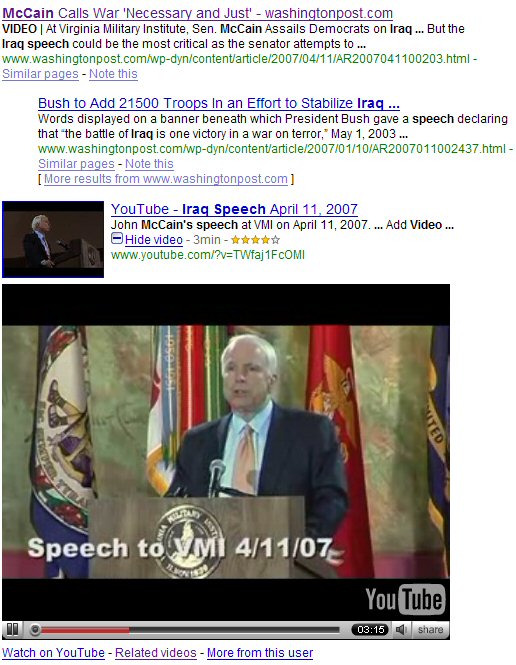 There are no ads currently on the YouTube video, but you can bet that will change. What’s clear is that on this particular search the Times, the Post, and MSBNC are likely to lose a lot of the traffic that they otherwise would have gotten.

This is disruptive disintermediation on a scale that I don’t think any media company has yet begun to imagine. And of course Philipp’s example illustrates that it’s not just big media companies that will be disintermediated — it’s everybody.

This is why Google hasn’t been worried about the YouTube copyright brouhaha — it’s just a side show. Once media companies understand what’s going on, it’s likely that there will be a dramatic shift in the disposition towards YouTube.

News Corp and NBC Universal can try competing with YouTube, but they still need their content to be found. The distribution deals will help, but like everything else, videos will be found primarily through search. And if your video is not on a Google platform, or one that Google includes in the Video PlusBox features, then you’re out of luck.

Google has certainly received mountains of hype over the years — but I think lately they have been underestimated.

The market and the internet don't care if you make money