I sat in on a presentation by a Google rep to a New York agency — it was a big, wet sloppy kiss. Here was Google, king of impersonal, self-serve online ad efficiency up to its eyeballs in gooey “relationship building.” It’s no accident that Google’s New York office has more humans than servers.

This is the main reason why Google acquired DoubleClick — relationships. From the Official Google Blog post:

To that end, we are truly excited to announce our acquisition of DoubleClick. DoubleClick provides a suite of products that enables agencies, advertisers, and publishers to work efficiently, that will enable Google to extend our ad network and develop deeper relationships with our partners.

Google has realized that it cannot growth solely through the value proposition of hyper-efficiency, because most of the ad dollars are still controlled by companies focused on “branding,” which is far from hyper-efficient, to say the least. As Fred Wilson points out:

But, banners carry branding value that text ads don’t. The return on investment measure is not as cold and hard with banners. And the big branded advertisers that are leaving TV and print in search of better performance on the internet want to be able to brand with their ads. And they want to control where those ads are run. They’ll pay more for those two features.

In other words, brand advertisers will pay more not to be raked over the coals of hard ROI. And this isn’t necessarily a bad thing — while a lot advertising is probably still wasted, a media and marketing world driven entirely by Google’s hyper-efficiency would not necessarily be an attractive place. 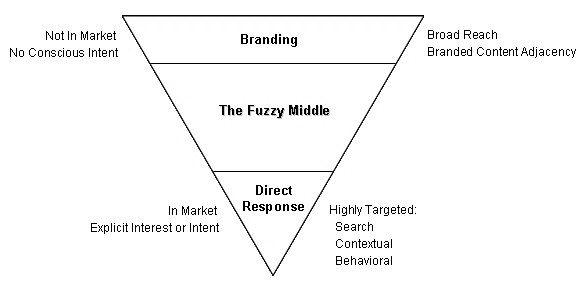 The Google rep I heard present towed the party line about Google not wanting to be an ad agency — and that’s probably right. Instead, Google is creating a people-driven platform centered on their huge regional offices and DoubleClick’s advertiser and publisher relationships.

People aren’t nearly as efficient as machines, but that doesn’t mean they can’t be programmed to feed Google’s money making machine.