The online video boom is starting to eat into TV viewing time, an ICM survey of 2,070 people for the BBC suggests. Some 43% of Britons who watch video from the internet or on a mobile device at least once a week said they watched less normal TV as a result.

So will online video save the broadcast TV business or kill it? Perhaps the better question is — will the video content business come out on the other end of this transformation greater or more diminished? Will loss of control over distribution mean loss of control over monetization? If consumers won’t tolerate pre-roll ads, and if the success of YouTube is driven by embedding the player in other sites, i.e. no control over the surrounding real estate, will new modes of monetization be nearly as profitable as old modes?

Google and every media company on the planet are racing to figure out the video conundrum. The MIT Ad Lab blog had an interesting suggestion — just embed the ad in the viewing screen: 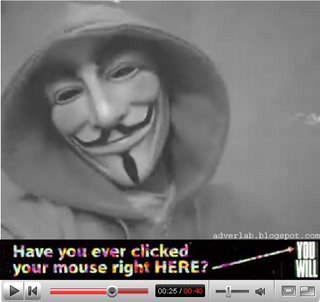 But isn’t this the same overbearing approach that made people hate ads in the first place?

Maybe the real question is whether innovations in advertising and other monetization models can prevent the video content business from eating itself alive.