I’ve been predicting for a while that companies would find ways to leverage the community marketing power of social networking sites like MySpace without the network seeing any financial benefit. Here’s a perfect example (via The Economist):

MySpace seems to offer a chance for companies to take their marketing into new, potentially more lucrative territory, by becoming, in effect, members of their customers’ network of "friends". A growing number of firms have established their own pages on MySpace, to which users can link. In the process, some are getting into bed with some unlikely partners. Earlier this year, for example, Unilever, a consumer-goods giant, hooked up with Christine Dolce to promote Axe, a deodorant. Ms Dolce, who goes by the alias ForBiddeN, boasts around 900,000 “friends” who link to her MySpace page. Bleached, buxom and with impressive marketing savvy, she is arguably the most successful brand to emerge from MySpace, and has already launched a line of clothing.

That made her perfect, Unilever concluded, to draw in the 18- to 24-year-old lustful lads to whom Axe is shamelessly marketed. So Ms Dolce hosted an interactive game, called “Gamekillers”, based around dating tips and designed subtly to promote Axe. Some 75,000 MySpacers signed up for it.

It’s not clear whether MySpace is getting any revenue from ForBiddeN’s Axe deal or any of the ads she runs for her own products. My guess is if they are, it’s not a significant percentage of the total dollars in play (please let me know if you’ve heard otherwise).

The risk to MySpace and other social networks is that savvy users like ForBiddeN will monetize the attention of other MySpace users and cut MySpace out of the loop. 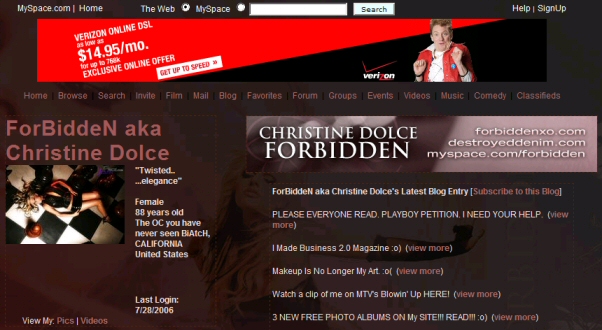 But I’ll bet Christine Dolce’s own ads are getting a lot more attention:

So what if MySpace tries to strong arm their way into the loop?

The users will just go elsewhere. Ask Friendster. (Or MySpace users who found their accounts missing.)

There is also an opportunity for ad networks to cut out the social network middleman — uEndorse, for example, is creating an ad channel that allows social network users to chose ads that appear on their pages and to endorse those commercial messages.

As I’ve said before, I think the big opportunity is in giving users a piece of the action.

Users will increasingly want to monetize rather than BE monetized.

Donna Bogatin (one of my favorite skeptic bloggers) does some back of the envelop math to estimate that MySpace is currently able to squeeze about $2 out of each user on average:

MySpace acquisition price reflects an approximate multiple of $5-$6 per “riend.”

MySpace is currently generating approximately $2 in revenue per “friend.”

This assumes, of course, that MySpace is able to act as the intermediary for each user’s attention…but when you live by the “users in control” sword…

Popular members like Ms. Dolce represent something of a dilemma for MySpace. The site says it has no problem with the photographs and content on Ms. Dolce’s page, which, while racy, stop short of being pornographic. Recently, however, MySpace, which is owned by News Corp., has been working to promote a family-friendly image to appeal to potential advertisers — some of whom could be leery of sexually suggestive pages like Ms. Dolce’s.

Ms. Dolce’s commercial deals have occasionally run afoul of MySpace’s rules. The service doesn’t allow using the network for direct commercial gain; because of the site’s regulations, Ms. Dolce is prohibited from sending mass messages to her MySpace friends about the products she’s paid to endorse.

And yet Dolce is running ads for her own products on her MySpace page.

Why is it that information on the economics of MySpace is always so sketchy and fuzzy?