Gawker’s Nick Denton has announced a restructuring, including a staff shake-up and the sale of two under-performing sites. Nick is a smart guy, and he’s clearly getting ready for the inevitable moment when the new media bubble begins to deflate — a “perversely countercyclical move” he calls it.

What I found most fascinating is the traffic trend chart that Nick posted: 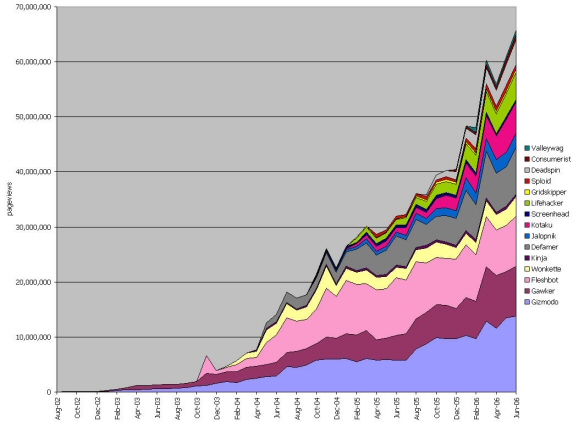 If you look at the growth in Gawker’s most successful sites, you’ll see that what sells in new media is what has always sold in media:

Gizdmodo represents a relatively new category that was underserved in mainstream media — gadgets for geeks.

The two sites that Gawker is selling, Sploid and Screenhead, were also attempts to go after established media niches — supermarket tabloids and Boing Boing.

With all the talk of revolution, it’s amazing how little new there is in the media galaxy. David Carr writing about the Gawker restructuring in the Times observes:

But the whole digital veneer masks a bit of a media traditionalist. His sites are arrayed over very common contemporary interests Ã¢â‚¬â€� celebrity, pornography, sports, Hollywood Ã¢â‚¬â€� that would not be out of place in mass magazines (a dead-tree medium, by the way, that he believes is far from dead). He thinks all of the bluster around blogs, fueled in part by AOL’s purchase of Weblogs, has brought stupid money off the sidelines. He has felt the touch of clammy hands from venture capitalists more times than he would care to count.

In many ways, DentonÃ¢â‚¬â„¢s Gawker.com stable Ã¢â‚¬â€� much like Jason CalacanisÃ¢â‚¬â„¢s very similar Weblogs Inc., now owned by AOL Ã¢â‚¬â€� are more like traditional magazines than they are like blogs. They have short items posted regularly, just like blogs, and they often have personality and a point of view just like blogs, but many of them donÃ¢â‚¬â„¢t accept comments (Valleywag makes you apply to be a member who can comment) and donÃ¢â‚¬â„¢t really have a sense of community about them.

Nick himself talks about the realities of advertisng that old media companies have face for decades:

First, advertising is a fickle thing. Particularly the entertainment advertising upon which so many websites depend. A change in the advertising industry’s conventional wisdom, cutbacks by the studios: it wouldn’t take much to prick the current exuberance. Better to sober up now, before the end of the party.

I wrote a while back about the bubble in media — add this to the mounting evidence.

Nick concurs: “There is no doubt that there is a bubble right now,” he said.