There may or may not be a Web 2.0 crash coming, as Steve Rubel has predicted, but there’s certainly blood in the water, with Yahoo’s earnings miss, Gather.com’s bad reviews, the demise of SearchFox, and the gathering buzz about an impending crash. Steve thinks a key factor is that “online advertising isn’t growing as fast as we would all like to think or hope” — online advertising is still on a steep upward curve, but Steve’s probably right that there’s not enough to go around, and the market will have to get rid of the Web 2.0 chafe.

I think another big problem is that Web 2.0 is driving Media 2.0 (or “New Media,” the other term I’ve been using). I’ve argued that if Media 2.0/New Media is based on Web 2.0 applications, it’s going to overwhelm the average person. Web 2.0 is a great platform for building applications that make everyday tasks easier, e.g. Google (search), eBay (sell/buy), Amazon reviews/recommendations (shop), and Flickr (organize/share photos) — I think Flickr is the poster child for successful Web 2.0 applications.

**Here’s the problem — Web 2.0 is not a great platform for helping the average person consume media. **

Consumer-created media is transforming the content landscape for the better, and consumer-controlled media is undoubtedly the new paradigm. But the average person does not have much time (if any) to spend creating media and has patience for only a finite amount of choice. Bloggers and others who put a lot of time and effort into media consumption and media creation are outliers — people may want something more customized than the morning paper, but they still want the simplicity and leisure feel. Media based on Web 2.0 is just too hard.

Mitch Shapiro, over at IP&Democracy, understands the problem and has an interesting meditation on Memeorandum, in which he acknowledges that next generation of functionality (e.g. highly-customized RSS feeds) still “wouldnÃ¢â‚¬â„¢t reach the ‘ease of use’ levels provided by Media 1.0 publishers.” Static media is on its way out, but “ease of use” remains the currency.

That’s why I’m not jumping on the Newsvine bandwagon. I think it’s a great application for bloggers and other cybergeeks, but it’s WAY too much work for the average person. So is Digg, and so is del.icio.us — most people don’t have time to do a lot of voting, tagging, saving, and commenting — there’s already too much filing and sorting to do at work and with the monthly bills. For the average person, media consumption consists of reading or viewing and then moving on to something else.

As happened with Wikipedia, a hardcore group of users may turn Newsvine into a successful site, but most people will just browse — they won’t participate. And a lot of people will be bewildered and turned off. 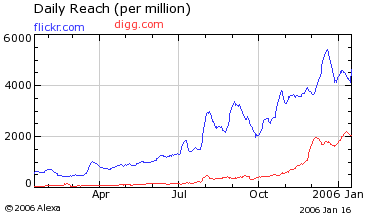 I would argue the difference here is that Flickr has broken through into the mainstream, while Digg is limited to the “technorati” (to borrow an elitist term). Compare Flickr to de.lici.us and you see the same thing: 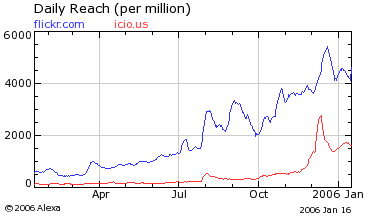 No doubt I will get lectured on technology adoption rates, but before you lecture, think about whether your own experience with technology represents that of the average person — I use the term “average person” on purpose, because I think the media habits of those in the blogosphere (which pretty much overlaps with power users of Web 2.0) are not representative of mainstream media consumers.

For bloggers and other people with the drive to create their own media, Web 2.0 media applications give them the infinite control they crave. But for the average person, what pressing problem does Newsvine, Digg, or de.licious solve? (Don’t get me started on RSS — I’ll put on my body armor and do that in another article.)

What the average person needs from New Media is not infinite choice and infinite control, but rather a user-friendly way to get their arms around — and find the value in — the avalanche of new content being created. They need more than aggregation — they need filtering, and even more, they need synthesis.

In another article, I’ll go into the difference between synthesis and aggregation. For now, I’ll end with an observation about MySpace. Here are the traffic curves for MySpace and Flickr: 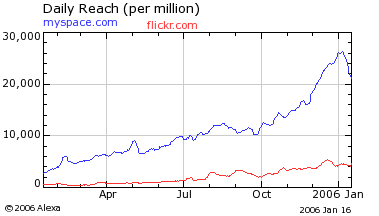 I’ll ask the same question — what problem does MySpace solve? It’s not about media consumption, and it’s not even about content creation — it’s about what young people in particular want to do most — socialize. MySpace makes it easier to hang out and be seen. It makes it easy to create your own space — something that is difficult for teenagers, indie bands, etc.

The New Media revolution will happen when someone figures out a way to solve the problem that the average person has with media, the same way that Google, MySpace, and eBay solved problems for average people — which means we need to start with understanding the average person’s problem, not with the techno-geek’s solution.